Meadowood’s celebrated resident artist (and Renaissance man) Bill Bourne is known for his watercolors. And his murals. And his pen-and-ink drawings. And his cartoons, with commentary on topics from politics to COVID-19. Not to mention his longtime career as a commercial artist and silkscreen printer. Oh, and he has a background in theatre set design. Are we missing anything? Probably.

Bill’s variety of projects is rivaled only by his formidable talent and his longtime dedication to his craft.

A Longstanding Artistic Collaboration With Meadowood
Although Bill and his wife Ginny, who sadly passed away in 2020, moved to the Cardinal Crest neighborhood of Meadowood from their five-bedroom house just three years ago, Bill’s artistic contributions to the community began much earlier.

“When they built the therapy pool, they asked me to do a mural at one end of the pool — that was 22 years ago,” he says. Bill also created watercolor paintings that have hung around the campus, and participated in the annual Meadowood art show, long before moving here.

To cap it all off, Bill even created Meadowood’s original sign. “I had a sign company, just a quarter mile down the road from Meadowood. I got to do the original sign at the entrance,” he explains.

Bill’s Varied Landscape of Work
A relatively new pursuit for Bill is pen-and-ink drawings, which make up the majority of his current Meadowood exhibit.

“When my wife died in May, I was pretty well devasted,” says Bill. “We were married for 72 years. That leaves a pretty big hole, so I started doing pen-and-ink drawings; I could get involved in them and forget everything else.”

One of the most welcome additions at Meadowood has been Bill’s topical cartoons. “I’ve done cartoons just for fun, all my life,” he says. “I’d send them to friends for birthdays. Then, about 10 years ago, I started doing a political cartoon and put it on Facebook. When I moved here, I gave up politics and started working on cartoons about Meadowood. I’ve probably done 150,” he estimated.

Bill’s latest cartoon series, which takes aim at the COVID-19 pandemic, will be featured in a CREAM (Continuing Resident Education at Meadowood) program later this month.

“I always try to do something that has a relation to life here at Meadowood,” Bill explains. “Obviously COVID is impacting lives, and I’m just commenting on things that COVID has done to change our normal way of life.”

He hopes that his cartoons “lighten things up a little. They are displayed by the mailboxes, and if I go down and somebody’s there, they’ll often make a comment.”

A couple of examples: “When winter came on and people started wearing coats and hats and masks, I did a cartoon on how difficult it is to identify people when you pass them in the hallway.” Now that the vaccine is here (Bill himself has had both shots), one cartoon shows the light at the end of a tunnel and a resident waving a vaccine card. 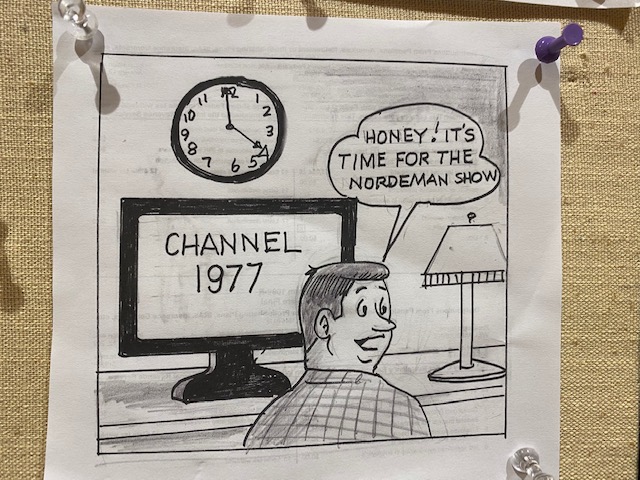 Bill’s Favorite Subject
If Bill had to pick a medium he’s worked in the most, it would be watercolor. And his favorite subject? Local landscapes, particularly farms.

Bill recalls a historic barn in Worcester that he painted in the ‘90s. “Before too many years, it was torn down and [the land was] used for homebuilding,” he said. That happened with other structures Bill painted, too. “I got the feeling that when I painted somebody’s barn, it was a bad omen,” he joked. Conveniently, Bill and Ginny lived across the street from the Peter Wentz Farmstead. “That was an easy subject,” he said. “I’ve done a dozen paintings of the farmstead.”

“Until I started doing these pen-and-ink drawings, I had been doing mostly watercolors in the studio. It was a really good place to work — lots of room and a lot of light,” Bill says.

“After my wife died and the art studio closed down because of COVID, I moved my drawing table into the den and turned it into an art studio,” Bill explains. “Because of space issues, that wasn’t very conducive to doing watercolors. That was why I started doing the pen-and-inks.”

“I’ll get back to doing watercolors once the art room is open,” Bill says, extolling the studio’s many advantages. “It has a southern exposure, a lot of light, and lots of room, there’s room to store your art supplies — it’s very convenient and very conducive to painting.”

The Artist’s Advice for Those Who Want to Create
“I found that, for myself, having the ability to do creative things is a great help in enjoying retirement,” Bill says. “I just can’t wait to get up in the morning to work on a project that is waiting for me to get going.”

He works on something art-related pretty much every day. “I keep a to-do list and work my schedule around it. Sometimes I go the studio and draw, sometimes I finish a piece using the computer, or I might have a meeting with somebody about a project.”

Bill’s favorite work of art? “I have a painting that I dedicated to my wife — it’s a painting of her feeding chickens when she was six years old,” he says. “I have it hanging outside the dining room at Meadowood.”’ 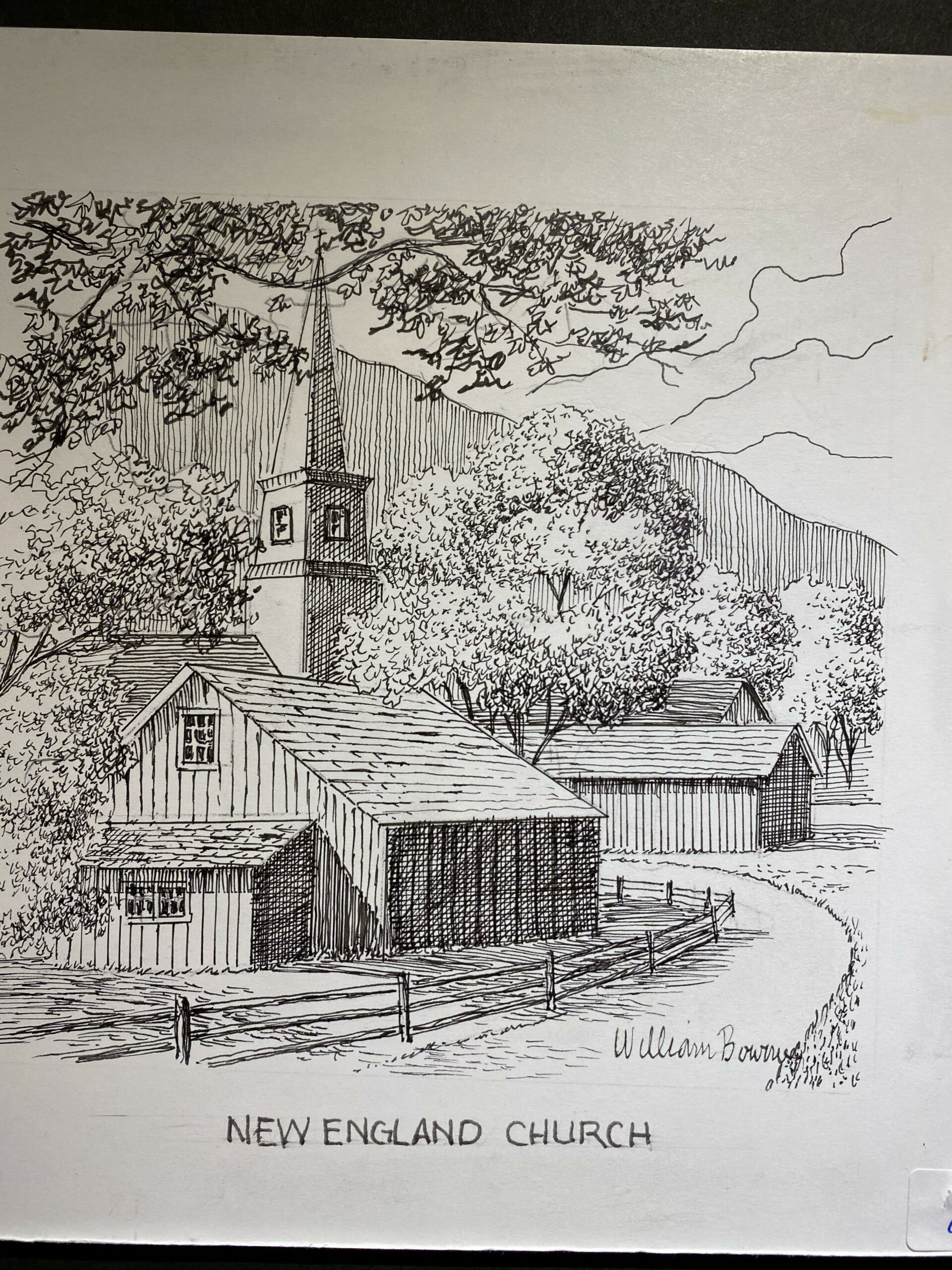