What’s Fall Without a Flügel?

What’s Fall Without a Flügel?

Spirits soared at Flügel Fest, a wildly popular Oktoberfest-themed event for residents and team members held at Meadowood on September 14 and 15.

But what’s a flügel, you may ask? You’re not alone. Many people at Meadowood asked that same question.

Flügel actually means “wing” in German, which is quite appropriate, considering that Meadowood’s symbol is the goose, and the community also awards “wings” to team members for exceptional customer service. Plus, in the words of the flyer advertising this one-of-a-kind event, “flügel is fun to say!”

How did the “flügel” name come to be? The unusual moniker was created during a naming contest for the event. The winner was Jody LaVerdure, Director of Development and Community Relations at Meadowood.

“Some people weren’t sure about the name,” says Jody. “It had to be explained — people didn’t know what it meant. ‘What’s a flügel?’ they’d ask. But then it grew on people and it definitely got everyone talking.”

How did Jody come up with the unique handle? “Since we were going with the Oktoberfest theme, I started looking up German words,” she says, “especially those associated with Meadowood. I found out that ‘wing’ was ‘flügel’ in German, and I liked the alliteration of ‘Flügel Fest.’”

Another unusual aspect of the Oktoberfest celebration was that Meadowood held it in September. (Or maybe not so unusual, because a fun fact Jody learned is that Germany’s Oktoberfest is actually held in September, too!)

For Meadowood, that early date turned out not only to align with the German event, but with the beautiful weather. “The weather was absolutely perfect outside for just about everything,” says Jody. Led by the Flügel Fest committee, team members and residents worked their hearts out getting everything ready, but the reactions made it all worthwhile. “Everyone was happy with everything — just so many compliments and so much appreciation,” says Jody.

This year, Flügel Fest replaces the traditional one-day Meadowood Fall Festival, which is usually held the first week in October and is open to the public. Flügel Fest offered many of the festival’s usual amenities to staff and employees, but since it was two days long, it boasted twice the activities and excitement. 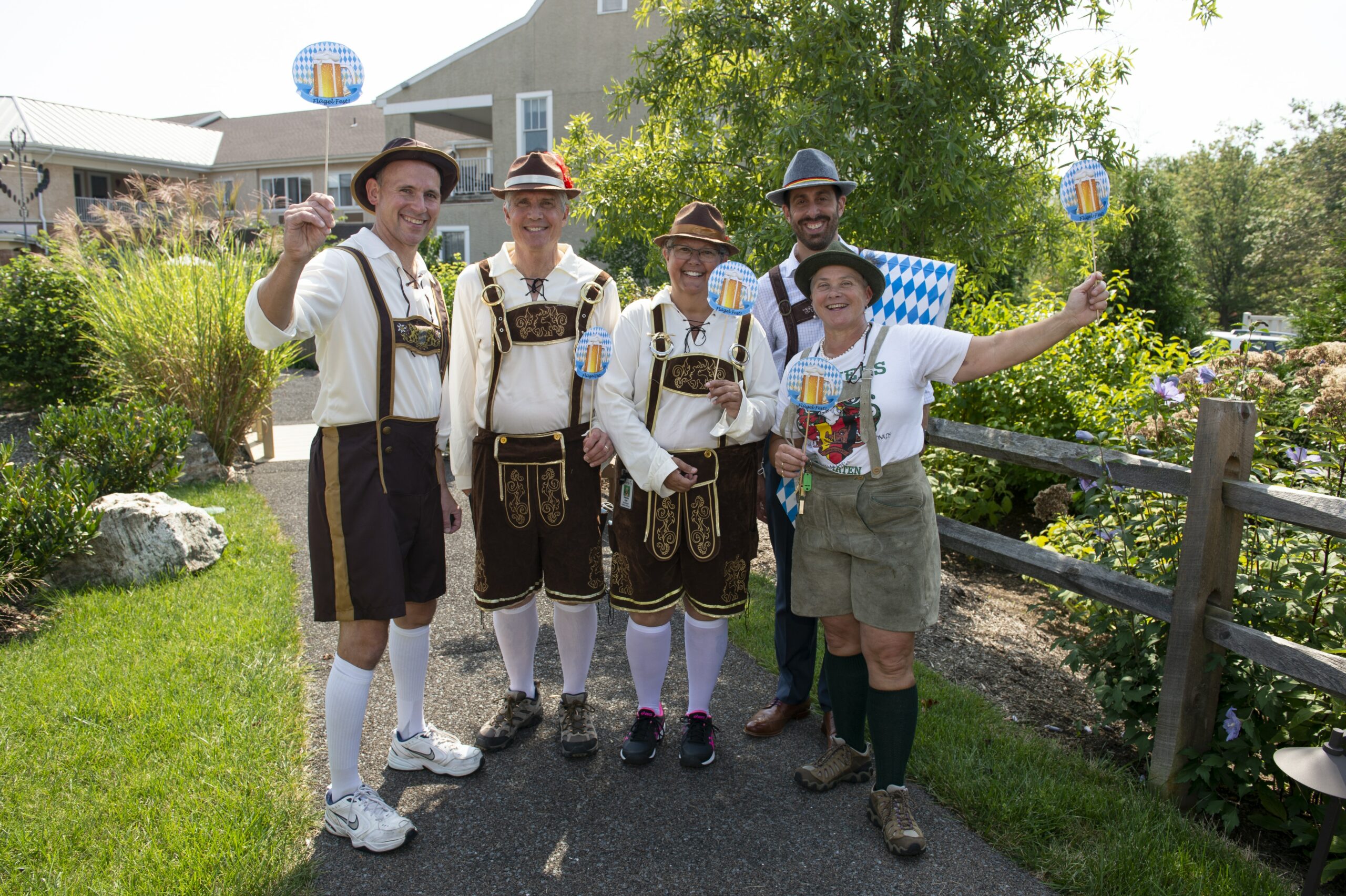 On Day 1, residents enjoyed a festive afternoon. “We transformed the Stratton Garden into a beer garden,” says Jody. Residents sipped German beers accompanied by appetizers of meats, cheeses and soft pretzels, followed by a delicious German-style dinner. Later in the evening, the celebration moved to the new Gathering Place at The Grove, where the Montgomery County Concert Band performed a fall concert. “Actually, we invited this band for our Spring Fling event,” says Jody, “and due to the weather, we tried two times to have the concert outside and couldn’t. Third time’s the charm!” She continues, “The residents called the day and evening magical. It was a beautiful evening under the stars.”

The tables turned on Day 2, with residents serving lunch to team members in the festively decorated Stratton “Beer” Garden. The team enjoyed delectable German fare, including delicious wings to match the event’s name.

Competitive matches of all kinds were held all over campus, including badminton, bocce, cornhole, golf, shuffleboard, Wii bowling and water volleyball. But it wasn’t just residents pitted against staff. “We mixed up the teams,” says Jody. For instance, she recalls, “I was in between two residents playing water volleyball. The resident/staff activities are a great way to interact and deepen the relationships with one another.”

Baked goods, jewelry and carved crafts from the woodworking shop were on sale, and there was a constant flow of traffic. Themed gift baskets, donated by team members and residents, were also raffled off. All the proceeds went to the Benevolence Fund. The wellness and life enrichment teams also brought Oktoberfest to the Health Center, where they organized fun activities, including trivia for prizes. And everyone lined up for sweet treats from the Downtown Scoop ice cream truck, brought by Director of Resident Services Angie Hange and her husband Kevin.

There were games, there was music, there were delicious eats and drinks. But the best part of Flügel Fest? “It was just nice to be able to be together again, to be outside in a beautiful setting and just have fun,” Jody says. “It was a chance to come together as a community.”